Crisis in the CISSS du Bas-Saint-Laurent: CUPE demands an urgent meeting with the Health Minister and addresses the Board 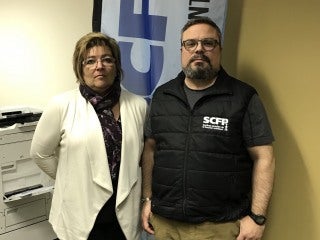 CUPE is sounding the alarm about acute staffing shortages in the CISSS du Bas-Saint-Laurent integrated health and social services centres.  They appeared before the Board today, and are demanding an urgent meeting with Danielle McCann, the Minister of Health and Social Services, to discuss the problems and the solutions to be adopted before it is too late. Services are already being affected by poor staffing, and the situation is getting worse as the Holiday Season approaches.

“The citizens of the Lower St. Lawrence deserve better. In the very near future, they will no longer have access to the same level of services as elsewhere given the staff shortage. However, we do have some solutions to propose. They are not necessary financial but rather organizational in nature. Unfortunately, the employer is not listening, and workers are concerned about the lack of openness about this crisis,” said CUPE 5007 president Johanne Campagna.

“Of course, the attractiveness of positions in the health care system overall is on the wane, but the situation at the CISSS du Bas-Saint-Laurent is deteriorating at an alarming rate. Employees are resigning right and left, and no replacements are in the wings. More than one-third of the positions go unfilled, and more than 80% of them are in CHSLDs,” added CUPE representative Yanick Proulx.

CUPE 5007 represents thousands of employees, themselves citizens in the Lower St. Lawrence, who are collectively quite worried about the future of their CISSS.

With close to 119,300 members in Quebec, CUPE represents 24,212 members in the health care and social services sector in Quebec. CUPE is also present in the following sectors: communications, education, universities, energy, municipalities, Crown Corporations and public organizations, air and land transportation, the mixed sector and maritime transportation. It is the largest union affiliated with the FTQ.