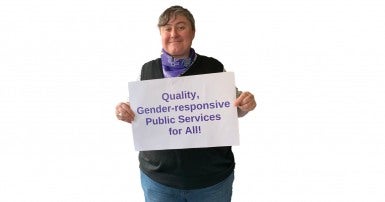 Over a decade ago, community health worker Gina McKay noticed a problem in her workplace. “We were creating inclusive spaces for clients, but it wasn’t happening for workers,” says Gina.

This experience prompted her to get involved in her local, CUPE 2348. She became a member facilitator shortly after and soon took on elected positions.

Today, Gina is the Labour Director at the United Way of Winnipeg and a proud member of CUPE 2348, where she serves as Recording Secretary. She remains passionate about creating safer spaces for equity-seeking workers.

As a queer Métis activist, Gina sees the labour movement as a natural fit for equity work. “The union is a way to get change to happen,” says Gina. Her local has made equity a bargaining priority. They have secured equity language in many of their agreements, including protections for gender expression, which is not covered by Manitoba provincial law.

Gina is dedicated to promoting equity in union spaces. “It’s about advancing rights,” she says. “Resolution writing, working within our own structures to create change – it provides an opportunity to lead the way through example.” Some of this work has focused on representation. Her local recently put forward a constitutional amendment to add a full slate of equity seats to the CUPE Manitoba executive board. The amendment passed unanimously at the last division convention.

She is especially proud of a project that emerged from her first encounter with the union, when she was advocating for respectful workplace practices in community healthcare. A few years back, Gina brought her provincial work on safer spaces to CUPE’s National Pink Triangle Committee. It complemented the work being done by other committee members on LGBTQ2+ healthcare and seniors’ issues.

Sensing a gap, the committee put forward resolutions to raise awareness on LGBTQ2+ seniors’ issues and to advocate for LGBTQ2+ competency in public services. Both were passed. CUPE’s new report on safer spaces in public services for LGBTQ2+ workers and seniors, released in March, emerged from this work.

Gina views the report, which features interviews with LGBTQ2+ CUPE members, as a perfect example of the collective power of the union to advance human rights. “The report is showcasing voices that aren’t at other tables,” says Gina. “What gives me the most hope is seeing that the experiences of members and stories from your own communities can make change.”