COP26 – workers must focus on solutions, not empty promises 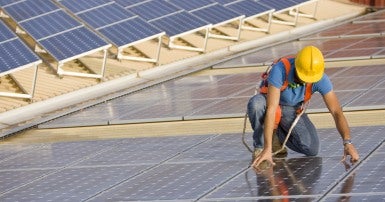 World leaders – including Canada’s Justin Trudeau – have again sadly under-performed with their feeble response to the climate emergency at COP26. There is little doubt that leadership from our governments is too weak, and that the influence of polluters on them is too strong. But despite the disappointing results of these international discussions, we must not lose hope. Unions and workers must now focus their energies on real solutions and centre our efforts on creating better ways of working that cut greenhouse gases that cause climate change.

COP26 wrapped up in Glasgow, Scotland, with a mild new agreement that will not hold global temperatures from rising more than 1.5℃. The planet is currently on track to warm 2.7℃ by the end of this century.

We now need to focus even more, and concretely, on job creation that results from greening our economy. For example, CUPE is partnered with the Green Economy Network that calls for job growth in low-carbon, public energy and transportation. Jobs can also be created that will help communities adapt to climate change through reforesting urban spaces and re-naturalizing waterfronts and coastlines. Cutting waste, bolstering recycling, and composting programs all grow good jobs. Plus, all CUPE jobs can be altered to cut emissions. Just Transition programs are necessary to protect workers and communities in these important and necessary changes.

Before COP26, CUPE participated in a Trade Union Task Force. The Trade Union Program for a Public Low-Carbon Energy Future was launched in Glasgow at the start of the COP26 to rally the international trade union movement to support a fundamental shift in climate and energy policy centred on a socially-just energy transition.

A people’s summit was also organized by environmental and development NGOs, trade unions, grassroots community campaigners, faith groups, youth groups, migrant and racial justice networks and others. That summit convened a diverse and impressive series of discussions outlining solutions working people can advocate for and pressure governments to support. The strengthening of broad social justice coalitions calling for real climate change solutions is a positive outcome of the COP process.

While COP26 under-delivered in stemming the phase-out of coal and fossil fuels that are at the root of the climate crisis, it has again inspired workers and other social justice and climate activists to invest their energy toward real solutions.