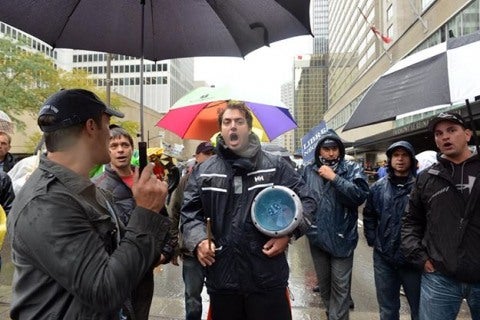 More than 1,000 representatives of the Coalition syndicale pour la libre négociation [Union Coalition for Free Negotiation] gathered this past Thursday at the Montreal Convention Centre to adopt a mobilization plan. The plan confirmed that a “Grand Dérangement,” or 24-hour work stoppage, would take place within the next few weeks along with a series of demonstrations.

After the meeting, the attendees made their way over to demonstrate outside of the Queen Elizabeth Hotel on René-Lévesque Boulevard West from 11:45 a.m. to 1:00 p.m. The hotel was hosting the “Grand forum pour de nouveaux partenariats” [Major Forum for New Partnerships] organized by the Institute for Public-Private Partnerships and the Union of Quebec Municipalities. Numerous representatives of the Couillard government and municipal officials were in attendance at that event along with representatives of major companies and firms. As a reminder to the event guests, the approximately 2,000 demonstrators with the Coalition chanted their slogan, “On n’a rien volé (nous)” (“We aren’t the ones who stole”).

“Municipal workers are rallying en masse against a government that is shooting in the dark at everything that moves,” explained Coalition spokesperson Marc Ranger. “Despite all the solutions and compromises we have adopted and proposed, no substantial changes have been made to Bill 3. No effort has been made all this time to allow for real negotiations.”

“Like a lot of people in Quebec these days, municipal workers are having a hard time getting the Liberal government to listen to them,” stated Paulin Aubé of the FPMQ, Ronald Martin of the APM and RAPQ, Yves Francoeur of the FPPM, Denis Marcoux of the FEESP-CSN and Jean Gagnon of the FISA. “And so we’re moving on to the next action phase. Our intention is to cause as little disruption as possible for the general public and as much as possible for those who are trying to take away our pension plans.”

The morning meeting also provided an opportunity to share information on upcoming legal disputes. The participants also passed a resolution supporting Ronald Martin and other municipal workers in Montréal targeted by sanctions.

The Coalition comprises more than 65,000 members including white and blue-collar workers, firefighters, police officers, professionals and public transportation employees. It represents virtually all unionized municipal employees in Quebec. Its detailed platform is available online at librenego.com.