A bad day for Ontario students 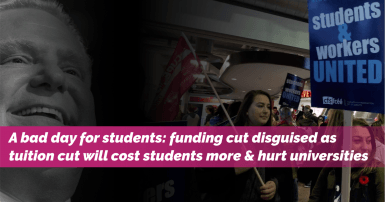 Doug Ford’s PC government has announced an unprecedented round of deep cuts to Ontario Universities, the conversion of student grants to loans, and an attack on student democracy on campuses.

“These cuts were made without consultation with the University sector, and will have damaging impacts for students for a long time to come”, said CUPE Ontario President Fred Hahn. “Doug Ford’s insiders have attempted to cover up a devastating attack on students with a paper-thin discount on tuition that will cost students more in the long run”.

The tuition discount will pass guaranteed funding cuts to universities of at least 4%, rising to as much as 10%. Meanwhile, student debt is expected to grow as a result of these changes, and the conversion of OSAP grants to loans will hurt students, particularly those from low-income families.

“These deep cuts will have a tremendous impact on the quality of education and range of services offered by Ontario’s Universities,” said Janice Folk-Dawson, sector chair of CUPE’s University Workers Committee. “These reckless and cynical maneuvers will force greater out-of-pocket costs onto students, regardless of the proposed tuition discount.”

“By cutting funding to student unions the Ford government is looking out for itself and its slash and burn agenda. Student democracy, through elections and referendums, should determine student fees, not government insiders,” said Hahn.