All in for our future 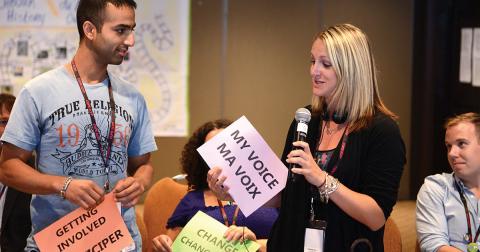 The voices and priorities of young workers were a major focus for CUPE during our Year of the New and Young Worker in 2013. Across the country and throughout our union, young workers gave CUPE their advice and shared their experience of the social, economic and political realities they face. The conversations also helped young workers connect with and learn about their union.

At a three-day strategy session, over 50 young CUPE members identified top priorities for action: build mentoring into CUPE’s day-to-day work; expand how we engage and orient new members; connect with young people before they enter the workforce; and continue to work to reflect the full diversity of CUPE’s membership at all levels of the union. The National Executive Board has passed a motion to act on many of the key issues raised at the strategy session.

Regional activities included a CUPE Quebec survey that found young Quebecers have a high opinion of unions and their role defending workers’ rights. Youth understand how unions have improved workers’ lives, and are clear what remains to be done on discrimination, retirement security, work-life balance and employer intimidation.

In Manitoba, CUPE worked with the division’s human rights and young workers’ committees to help fund the Manitoba Association for Rights and Liberties’ Under 18 Handbook. The legal guide outlines young people’s employment and human rights.

CUPE’s spotlight on young workers goes hand-in-hand with our Fairness work to involve and engage members in everything CUPE does.