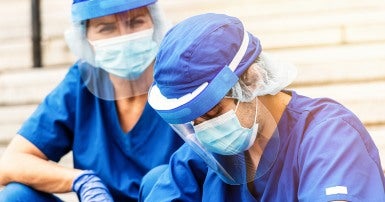 Alberta Premier Jason Kenney is facing fierce criticism for his mishandling of the government’s COVID-19 response. The United Conservative Party (UCP) government has struggled to get a hold on the growing capacity crisis within the Alberta health care system and delayed taking meaningful action to slow the spread of the virus.

The Premier is facing a crisis of confidence. In September, he managed to avoid a non-confidence vote from within his caucus but his leadership remains in question.

Leaders from Alberta’s largest unions were among the first to highlight the dire situation in Alberta and demand action from the Kenney government. In mid-September, CUPE joined the United Nurses of Alberta, the Health Science Association of Alberta, and the Alberta Union of Provincial Employees, calling on Premier Kenney to seek federal assistance from the Canadian Armed Forces. Days after the call from union leaders, and in reaction to predictions that Alberta’s intensive care unit capacity would soon be overwhelmed, the government announced it would accept support from the military, the Red Cross and other provinces. As public pressure grew, the UCP were forced to take additional steps.

Premier Kenney belatedly announced a provincial vaccine passport program only weeks after declaring his government would not consider one. The program is called the “restriction exemption program,” and allows for fully vaccinated Albertans to continue to patronize non-essential businesses.

In addition, Alberta public sector workers will be required to submit proof of vaccination or obtain an accommodation based on the Alberta Human Rights Act. Public sector workers may instead produce a negative PCR or rapid test. The results are only valid within 72 hours of each scheduled workday, and the hefty cost is the personal responsibility of the workers.

Finally, in response to recent protests outside Alberta hospitals, the UCP government has expanded the Critical Infrastructure Defence Act to include hospitals and other health facilities under the same protections as railways, highways, and pipelines. Individuals who violate the law by trespassing or interrupting operations could face fines up to $25,000 or jail time; corporations could be fined up to $200,000.

“I’m glad the government has finally taken some action, but at the end of the day it’s too little, too late. The damage has been done and people have lost their lives. Jason Kenney needs to be held accountable for that,” said Gill.

The UCP caucus remains divided. Some MLAs believe the province needed harsher restrictions sooner, while others think the economy should remain completely open and the virus left to run its course. As Jason Kenney tries to manage internal caucus turmoil, his political future remains uncertain. He will face a formal leadership review earlier than planned, at the UCP’s Annual General Meeting in April 2022.