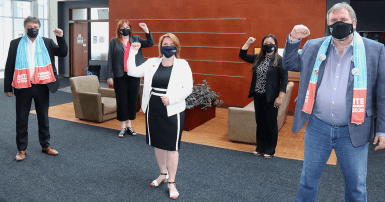 CUPE congratulates Bea Bruske, CUPE 79’s Lily Chang and Siobhan Vipond of Team Unite on their election to the positions of president, secretary-treasurer and executive vice-president of the Canadian Labour Congress at CLC Convention 2021.

Team Unite has been given a mandate to unify and energize the labour movement in Canada as Canadian workers prepare for the challenges that lie ahead in the post-COVID era. With their experience and skill sets these three remarkable women are well suited to take on the task of building a united labour movement by engaging workers on the issues that matter. They will join Larry Rousseau who was re-elected for a third term as executive vice president.

With Larry providing continuity and Bea, Lily and Siobhan bringing new energy to the CLC, the future of the Canadian labour movement will be defined by increased engagement, mobilization around workers’ issues, and unity among Canada’s unions.

We wish the new CLC executive all the best as they prepare to lead Canada’s labour movement into the future.