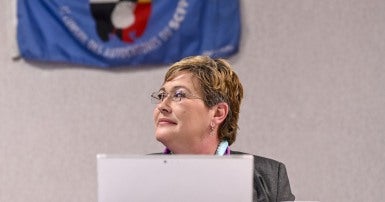 CUPE congratulates sister Gloria Lepine on her election as Equity Vice-President for Indigenous Workers at the 2021 Canadian Labour Congress Convention.

Lepine is a member and Chief Steward of CUPE 3550, representing educational support staff at Edmonton Public Schools. She has also served as CUPE National Diversity Vice-President on our National Executive Board.

Lepine has been a tireless advocate for Indigenous workers across Canada and has worked to raise the issue of murdered and missing indigenous women on the national stage. Sister Lepine has organized postcard campaigns, rallies, vigils and other events to bring attention and justice to the issue of our stolen sisters.

The recent discovery of the remains of 215 children at an unmarked grave near a Kamloops residential school has forced Canada to confront the horror inflicted upon Indigenous people throughout our history. The systemic racism and legacy of colonialism continues to impact the lives of Indigenous people and workers. Canada’s labour movement must play a role in these national discussions and Sister Lepine’s experience and dedication will ensure Indigenous workers will have a strong voice in the Canadian Labour Congress.