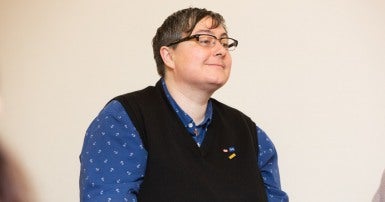 A queer, Métis activist, Gina currently serves as Recording-Secretary for CUPE 2348, a diverse local representing a number of community health and social services workplaces on Treaty 1 territory in Winnipeg. She is also a member of CUPE’s National Pink Triangle Committee.

Gina has dedicated her career to advancing human rights. Recognizing that unions have the power to make change, she has put equity issues on the bargaining table and secured equity language and protections for gender expression that go beyond what is covered by Manitoba law.

Gina has worked on LGBTQ2+ issues with CUPE at the local, provincial and national level, with the Manitoba Federation of Labour, with the CLC and even internationally with Public Services International’s LGBTQ2+ contingent to the UN Commission on the Status of Women. Her passion and dedication will make a lasting mark on the future of the CLC and the Canadian Labour movement.