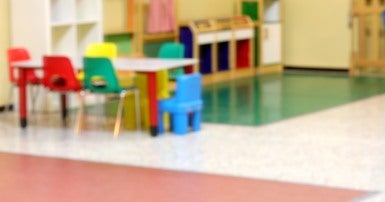 A looming council vote in the Region of Waterloo, Ontario could displace more than 250 families from quality, municipally funded child care on December 2, 2020.

Dozens of parents voiced their sadness, concern, and fear regarding the potential closures at a recent council meeting, citing that there simply isn’t enough child care in the region to accommodate the need.

“My son is hearing impaired—if the children’s centre he attends closes, I’ll have to quit my job in order to ensure he gets the care he needs,” says Tania Resendes, a parent whose son attends Christopher Children’s Centre, one of five centres up for closure.

The vote to determine the future of the the centres comes on the heels of a report from the Centre for Future Work that outlines how a universal child care system would generate between $17 to $19 billion in government revenues, ultimately paying for itself in the long run.

“Universal, non-for-profit, and accessible child care is needed now more than ever—COVID-19 has unearthed just how important child care is to ensure women’s participation in the workforce and to safeguard our economic recovery,” says Noelle Fletcher, President of CUPE Local 1883. “In 2015, a similar mandate was presented to council and they voted it down for good reason, now is not the time to cut public services that support families during this unimaginable time.”

During a November 18 meeting of the Region of Waterloo’s Council, nearly 50 parents, child care advocates, and community members delivered deputations encouraging councilors to save the region’s children’s centres.