Bargaining Forward: The story of the 2021 CUPE strike in New Brunswick 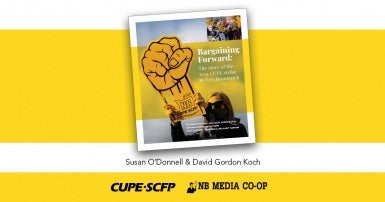 CUPE is proud to announce the launch of a new book on the successful strike by 22,000 CUPE members in New Brunswick.

Bargaining Forward: The story of the 2021 CUPE Strike in New Brunswick details how front-line public sector workers stood together and won against a hostile government. Illustrated with full-colour photos, the book is written by Professor Susan O’Donnell and journalist David G. Koch. The authors work with the NB Media Co-op and are experienced labour reporters. The book features an introduction by labour historian David Frank and a conclusion by CUPE New Brunswick president Steve Drost and Maritimes regional director Sandy Harding.

Co-published by CUPE and the NB Media Co-op, the print edition of Bargaining Forward is available for purchase in CUPE’s online store. Learn how these workers organized to win – get your copy today!

Full-colour, print edition of Bargaining Forward: The story of the 2021 CUPE strike in New Brunswick by Susan O’Donnell and David Gordon Koch. Published by CUPE and the New Brunswick Media Co-op, 2023.

Contact webmaster@cupe.ca to pay by means other than cheque or direct remittance.