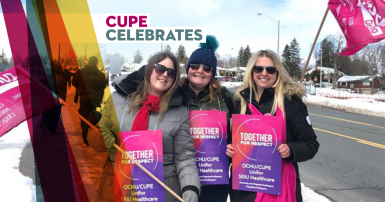 Intense weekend bargaining for 75,000 Ontario hospital workers whose three unions formed a unique alliance in provincial negotiations has resulted in a tentative contract with hospital employers.

The settlement comes after weeks of mobilizing, rallying and doing visible workplace actions under the banner of ‘Together For Respect’, at more than 100 hospitals across Ontario by hospital workers with CUPE, SEIU Healthcare and Unifor.

“Frequently, hospital workers are activists for quality patient care and services in communities across Ontario,” says SEIU president Sharleen Stewart. “It is with much humility that they came forward to advocate for their own working conditions and respect in the workplace. Together, our three unions were able to accomplish something that, on our own, we would not have been able to do.”

In addition to new language on workplace violence, the tentative deal provides for a wage increase and no concessions.

A CUPE poll found that 68 per cent of hospital direct care staff had experienced violence in the last year.

“We have achieved new violence language which includes agreement by the hospitals that a workplace free of violence is a shared goal. We are committed to work to stop the violence that our members experience at work. For that reason, the battle for respect will continue,” says Michael Hurley, president of CUPE’s Ontario Council of Hospital Unions (OCHU/CUPE).

The hospitals had tabled a long list of concessions and they had refused to extend the wage increases they voluntarily agreed to with other employees, to the nursing, clerical and other hospital support staff represented by the three unions. Reaching impasse at their respective negotiations, CUPE, SEIU and Unifor formed their first-ever, tri-union bargaining alliance at the end of March.

“The hospitals had offered inferior wages and were looking to take away hard-earned rights. To achieve a contract without takeaways is in no small part because hospital workers showed visible solidarity for their bargaining teams. We want to acknowledge the determination of SEIU, CUPE and Unifor members to mobilize for a fair contract,” says Katha Fortier, Assistant to the Unifor National president.

Unifor, CUPE, SEIU hospital sector members will be voting on the contract over the next few weeks.