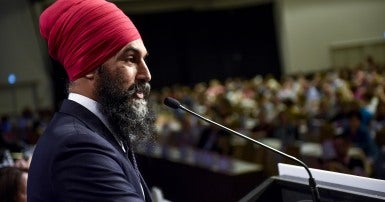 CUPE strongly supports the measures proposed today by Jagmeet Singh and the NDP to reduce wealth inequality in Canada and power Canada’s economy recovery from COVID-19.

When COVID-19 shut down the Canadian economy in March, the federal government rightly invested in creating the Canada Emergency Response Benefit (CERB) and the Canada Emergency Wage Subsidy (CEWS). These programs kept millions of working Canadians from poverty and financial collapse – but they also came with a cost. But while the government has gone into debt to keep Canadians afloat during the pandemic, the country’s billionaires have watched their fortunes expand by nearly $40 billion since March.

We agree with the NDP: now more than ever, it’s time for the billionaire class to pay their fair share, and shoulder some of the cost of our economic recovery.

The NDP has proposed creating a temporary COVID-10 Excess Profit Tax, just as Canada and other countries did during the World Wars, that would double the tax rate on excess profits.

The NDP has also proposed creating a 1% wealth tax every year on families with wealth over $20 million, cracking down on tax havens and closing tax loopholes, forcing web giants to finally start paying their share, and beefing up enforcement to head off tax evasion.

It’s a certainty that the Conservatives, and some within the Liberal government too, will call for the government to cut services for people when they need it most in order to balance the budget.

The reality is, working families should not be forced to shoulder the cost of the pandemic by losing important services - services that CUPE members deliver. It’s time for stronger federal tax measures to ensure the ultra-rich in our society pay their fair share.