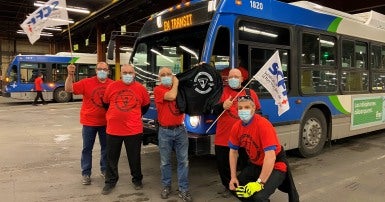 CUPE 5959, representing bus drivers with the Société de transport de Laval (STL) who are negotiating a new collective agreement, has launched an awareness campaign on the importance of public transit in Laval.

Starting Thursday, drivers will be wearing a red T-shirt sporting the campaign slogan: “Mobilisés pour la mobilité!” (Mobilized for mobility) instead of their uniforms.

“We are concerned about some of the things we heard at the bargaining table. The employer wants to change how it manages drivers’ routes and schedules. This reorganization is unnecessary, because their goals are already being accomplished with the current system,” said Patrick Lafleur, president of CUPE 5959. “We want to show that we are proud to serve residents of Laval, and we repeat that we are productive partners in the sustainable development of the city.”

The collective agreement expired on July 31, 2019. The parties have been negotiating since November 2019, but the talks have not been going well. In January 2021, the union voted to approve pressure tactics up to and including an unlimited general strike.

At the bargaining table, the union has asked to be a stakeholder in the group insurance plan and wants input on the terms and conditions of the coverage offered, since it is paying into the plan.