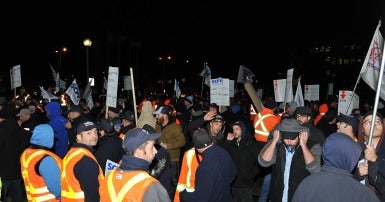 A large delegation, including hundreds of representatives of the Syndicat des cols bleus de Laval (CUPE 4545) and many of their colleagues from the municipal sector and CUPE-Québec, showed up at Laval City Council to question elected officials about the privatization of a portion of snow removal service in Laval.

This decision was made in spite of the fact that no evidence had been presented to prove the economic benefits of contracting out. Moreover, there are numerous examples of cities and municipalities that have successfully brought back snow removal in house. In Quebec City, this task in Val-Bélair was given back to blue-collar workers in order to meet demand. The town of Saint-Constant also decided to return snow removal to its employees.

“In-house expertise is invaluable and getting rid of it would not only prove costly to the city, but especially to its citizens,” stated Pierre-Guy Sylvestre, a CUPE economist.

The union representatives find it deplorable that the City of Laval officials learned nothing from the Charbonneau Commission, which revealed that city employees are one of the most effective bastions against cost overruns, collusion and corruption.

“Inefficiencies, waste and corruption are too often associated with the contracting out of public services,” pointed out Denis Bolduc, president of CUPE-Québec.

Marc Ranger, the Director of CUPE-Québec, reminded Laval’s elected officials and the citizens who were present, the spirit in which the last collective agreement was negotiated. He directly approached Laval’s mayor Marc Demers to have him cancel the contract awarded to the private sector.

“The City has the authority to cancel this contract at a reasonable cost. In addition, the blue-collar workers have proved they are competent and easier to deal with than a private-sector company. The City created a needless rift in its relations with the blue-collar workers, which it must repair,” said Ranger.

The president of the Syndicat des cols bleus de Laval indicated that the bond of trust with the employer has indeed been affected.

“This nonsensical decision by the City has has severely wounded the pride of we blue-collar workers,” said Louis-Pierre Plourde, president of the Syndicat des cols bleus de Laval (CUPE 4545).