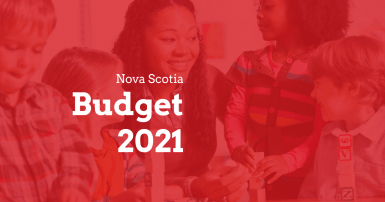 Early childhood educators in Nova Scotia are deeply disappointed that the provincial budget released last week by the Rankin government does not include any new funding to provide early childhood education to families of children under the age of four and to stabilize the sector of work.

Early childhood educators in Nova Scotia’s child care centres do not receive the same compensation as those working in public schools, even though they do the same work and have the same qualifications.

“For decades, the provincial government has suppressed wages for early childhood educators – who are predominantly women,” says Margot Nickerson, president of CUPE 4745.

“Since the province began the pre-primary program in 2017, many early childhood educators have decided to leave their jobs at centres in order to provide for their own economic security,” says Nickerson. “Many child care centres, that exist outside of the pre-primary program, are struggling to survive even though they are necessary to provide education and care to children under the age of four.”

The provision of regulated child care spaces in Nova Scotia is directly related to how well the operation of services is funded – a responsibility that rests squarely on the shoulders of the Premier Rankin and Minister of Education and Early Childhood Development Derek Mombourquette.

Until the provincial government establishes a clear vision and commits to providing early childhood education for children under the age of four, the sector will continue to be severely compromised.