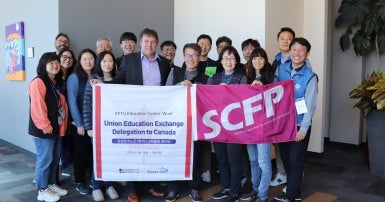 In Korean, ‘wum’ refers to the new sprout of a plant or tree and is the last syllable in the words for learning, filling, and newness. Wum is also the name of the Korean Public Service and Transport Workers’ Union (KPTU) education centre.

This past spring, CUPE welcomed a 14-member delegation from the KPTU, South Korea’s largest union. They came to learn about CUPE’s education and member facilitation program. CUPE educators, members and leaders also got a chance to learn more about our sister union in South Korea. We exchanged information about member facilitation training, the political context in our countries, and the need for international solidarity among unions.

Delegation members said meeting with our member facilitators and attending courses was a highlight of their visit. CUPE members and KPTU staff exchanged many ideas and questions that helped us think about how we do our member education work.

Since the KPTU was founded 30 years ago, growing privatization and precarity have limited members’ access to education and their ability to fight back. KPTU members have always learned through campaigns on picket lines and in mass demonstrations. The rise of the right wing and increased corporate power sector have weakened opportunities for this type of education.

The KPTU is looking at further developing a structured and systematic program of education, coupled with running campaign-based education. Examples of a structured program include CUPE’s Steward Learning Series, local executive training, as well as anti-oppression and human rights work.

The delegation met with CUPE National leaders and staff and observed our union’s participatory adult education approach in action at the Ontario spring school. This approach is rooted in member’s lived experience. Courses are developed with an adult education lens. Workshops use the experience and knowledge of the participants in the room, and build on this by adding new knowledge. Participants practice new skills and then apply what they’ve learned to their life and communities.

South Korean workers face many daily challenges. Economic problems are being used as an excuse for austerity-driven mass layoffs wage cuts, privatization and public service cuts.  Precarious work and workplace accident rates are on the rise. These conditions resonated with CUPE members, and are familiar to public sector workers around the world.

The visit coincided with May Day. KPTU members marked international workers’ day by joining a demonstration of airport workers at Toronto’s Pearson Airport. It was a reminder that workers have been challenging the capitalist system through international solidarity for over a century.

Two KPTU leaders also attended CUPE Newfoundland and Labrador’s first-ever Global Justice Conference, held right before the provincial division convention. KPTU Education Centre Director Kyungkyu Yang told convention delegates that “international solidarity is now more important than ever. ‘Workers of the world unite!’ is not an outdated or trite slogan. It must become our natural goal and practice. This means our gathering and voices together today have deep meaning. I believe that international solidarity must develop beyond exchange among union leaderships to involve workers’ concrete collective action and direct exchange.”

He asked convention delegates, “what is the farthest distance we all need to travel?”. When no one responded he said “It’s from our minds to our hearts. Together we can move from our hearts to our feet and change the world.”