CUPE statement on violence in Nigeria 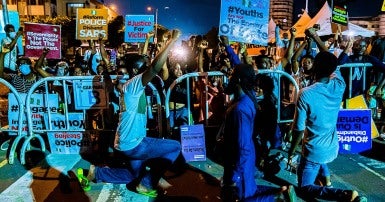 CUPE expresses our solidarity with youth in Nigeria, whose courageous resistance in the streets has resulted in horrific violence and a massacre at the hands of the state forces. Peaceful protesters, with just demands to end police violence and corrupt undemocratic governance, have been met with excessive force from security agents and the military since protests began on October 8.

On October 20, the army opened fire on thousands of protesters, killing more than 100 people.

We condemn this violence. The protesters are demanding an end to police brutality; accountability for extrajudicial killings, rape, torture and extortion by police officers; and policing reforms. These demands must be heard and acted upon.

We further join the international community in calling for an impartial, thorough and transparent investigation into all cases of human rights violations by the police, and for access to justice and effective remedies for the victims and their families.