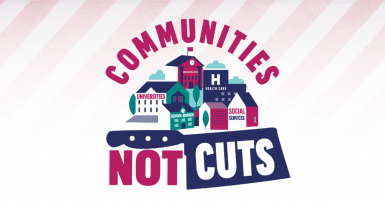 CUPE Ontario announced today their Communities not Cuts campaign. This province-wide initiative brings together public sector workers and communities in a fightback against the Ford Conservative government’s all out attack on Ontario’s public services and the workers who provide them.

“Every community, every type of work we do, every service Ontarians rely on is threatened.  Today we launch our campaign to fight back alongside communities and send the Ford Conservatives a message.  A message that we are united with others in our efforts to protect jobs, protect our communities and protect the vital public services our members, our friends and families rely on every single day,” stated Fred Hahn, president of CUPE Ontario.

Joined by front-line workers and provincial leaders at a Queen’s Park press conference, Hahn emphasized that the Ford Conservatives’ cuts to public services is making life harder for all Ontarians and now they are also attacking the workers who are doing their provide services under the strain of devastating cuts.

“Our members work hard everyday, in healthcare, education, universities, social services and in municipalities all across this province,” said Hahn. “Those jobs have gotten harder after years of cuts that have only accelerated under the Ford Conservatives and now that same government is attacking their rights and financial future. This has got to stop.”

On June 5, one day before taking a 5-month break from the Legislature, the Ford Conservatives introduced Bill 124, which will violate the Charter-Rights of almost one million Ontarians, causing wages in the public sector to further stagnate well below the rate of inflation. The Ford Conservatives claim the Bill is necessary to cut spending to deal with the deficit despite overwhelming proof that Ontario has a revenue problem, not a spending problem.

“Profitable corporations need to pay their fair share to help lower the deficit and fund public services.  Raising taxes for profitable corporations and the wealthiest in our communities will help.  Attacking the rights of frontline workers doesn’t solve Ontario’s money problems. And combined with cuts to the services we all need, all it does is put families and communities further behind.  We know people are already resisting these changes and we’re adding our efforts with this campaign to come together to stop this,” Hahn said.

Communities, Not Cuts will be an aggressive, multi-year campaign where CUPE members will work with other workers, those in a union or not, community activists, families, neighbours to fight Ford and defend vital public services and good jobs.  The campaign will encompass a broad range of activities, from supporting direct actions in communities, to an extensive advertising and online/social media presence, door knocking and talking to Ontarians, town halls, and visiting local MPPs in every riding.

“The Ford Conservatives are hurting Ontarians. That’s why CUPE Ontario will do what the government has refused to do and that’s listen to the people of Ontario. CUPE Ontario pledges to support every worker and every member in our communities to defend services that matter most to them.” said Hahn.

CUPE Ontario is Ontario’s Community Union, representing more than 270,000 municipal, health care, school board, post-secondary education and social services workers in every region of the Province. More information on the Communities, Not Cuts campaign can be found by visiting cupe.on.ca/communitiesnotcuts.