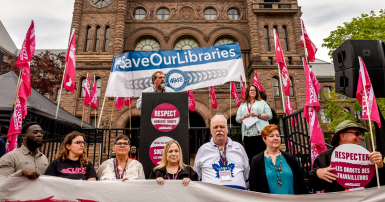 CUPE National President Mark Hancock says the Ford government’s new legislation to cap wages for union and non-union workers marks a new low for the Ontario Conservative government and vowed CUPE will fight the legislation to the very end.

“This is an attack not just on Ontario workers’ wages, but on their Charter-protected right to free and fair collective bargaining,” said Hancock. “Doug Ford telling Ontario workers that they have to do their part and accept what amounts to a pay cut, while giving generous tax cuts to Ontario’s wealthiest corporations and biggest polluters, is beyond hypocritical - it’s an outright betrayal,” said Hancock.

CUPE members in schools, hospitals, universities, and social service agencies across Ontario will be affected by the legislation.

“Over the past year, Doug Ford has cut minimum wage increases, mandatory vacation and sick days for Ontario’s poorest workers and then this week announced he was giving himself a five-month summer vacation,” said Hancock. “Doug Ford isn’t ‘for the people’; he isn’t ‘for’ anybody but himself and his Bay Street buddies.”

Hancock affirmed that even though the Ford government holds a majority at Queen’s Park, this matter is anything but closed.

“CUPE is fighting this same kind of regressive conservative legislation in Manitoba and in Nova Scotia, and we’ll continue the fight for free and fair collective bargaining in Ontario. And we will win.”