Courage and resilience in Colombia 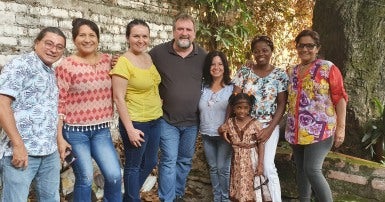 In October, I had the opportunity to visit Colombia on a CUPE delegation to meet with two incredible organizations that we partner with through CUPE’s Global Justice Fund.

We spent a lot of time with NOMADESC, a research and human rights organization led by the fearless Berenice Celeita, who toured us through places the Canadian government tells us not to go.

We went to the port city of Buenaventura, the hub of the country’s most important trade routes, where development by foreign-owned resource companies has forced thousands of Indigenous and Afro-Colombian peoples from their communities, into a city that doesn’t have the housing, the services, or the jobs to support them.

Two years ago, these people banded together and shut the city down for 22 days, demanding safety, security and essential services like water, sanitation, health care and education for the over-grown community.

I met with members of the civic strike committee and heard about their continuing struggles, and I watched as one of the leaders of that strike, Victor Vidal, was elected as Mayor of Buenaventura.

A couple of days later, we were scheduled to meet with Indigenous leaders in the province of Cauca.

The evening before that meeting, news broke that five Indigenous leaders had been gunned down by members of a paramilitary group. One was a young woman, an elected governor of her community. The other four were territorial guards, who patrol their communities armed only with a ceremonial staff because, despite the violence that has been created by a stalled peace process, these communities have chosen to maintain a peaceful existence in their territories, in keeping with their traditions.

The next day we travelled to Tacueyo, the community where the slaughter had happened less than 24 hours before, and we witnessed hundreds of members from the surrounding communities come together.

They came to grieve, but they also organized. More than 600 hundred people, in the midst of such a tragic loss, broke into discussion groups. They talked about the choices in front of them and how to move forward. What I witnessed that day was incredible courage, in the face of a tragedy, I still can’t quite comprehend.

I also spent a day with SINTRACUAVALLE – the union representing workers at Colombia’s only public water provider, who have been bravely fighting water privatization in Colombia in the face of sometimes violent opposition.

We toured a water treatment facility, which had fewer bells and whistles than most of ours do, but still provides safe and clean public drinking water to the communities it serves. And we attended a meeting the union hosted for community members who are fighting for public water services.

It was really something to listen to the workers and residents speak so passionately about the importance of water. But it was chilling to know that the union’s president, my friend Margarita Lopez, does not step outside her home without her security detail. In Colombia, she is under constant threat – for being a community organizer, and for being a trade unionist.

I found such deep inspiration in the remarkable courage of the women and men I met in Colombia, who organize and fight for human rights, and who stand against corruption and corporate aggression in the face of such adversity and violent opposition.

Their courage reminds me that there are too many places in this world, still today, where it isn’t always safe to speak out for the things you believe in, and where you risk your life just being a union activist.

Here in Canada, we face challenges, in our workplaces, in our communities, and even within our union.

But we have to keep those challenges in perspective and stand firm in our resolve to fight injustice wherever we encounter it, and to keep building a better world through international solidarity.