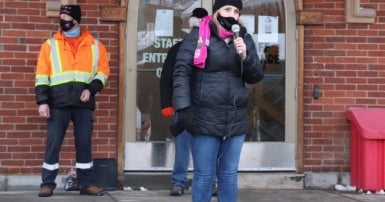 Members and supporters of CUPE 907, which represents front-line workers for the City of Belleville held a social distanced rally yesterday at City Hall to show support for front-line workers and send a message to the mayor and council to negotiate a fair contact with city workers.

“We know that a deal is possible,” said Marc Goulet, frontline worker and president of CUPE 907, addressing a limited crowd at City Hall, “neighbouring communities have negotiated fair deals during the pandemic that respect the effort of frontline workers. They value keeping their services running and keeping people safe.”

Due to COVID-19 restrictions the rally was limited to fewer than 100 people, while others showed support by joining a car rally that circled City Hall.

Laura Walton, President of CUPE’s Ontario School Board Council of Unions, and Belleville resident, joined Goulet at the Rally. “We’ve seen this all too often during the pandemic. Frontline workers are called heroes when it is convenient,” Walton said, referring to comments made by Mayor Mitch Panciuk earlier in the pandemic, praising city workers for their flexibility and co-operation. “They are praised when a boss or a government wants to take credit for something, but when it comes time to show some respect, whether that means pandemic pay, or paid sick days, proper protective equipment or negotiating a fair contract. Then you don’t hear the word hero anymore.”

CUPE 907 has been without a contract since March 31, 2019, when their four-year agreement expired. The union has accused the mayor of opportunistically using the pandemic to attempt to force through a sub-standard contract. “We have been at these negotiations for a while, before COVID-19, and all of a sudden the city just decided to scrap everything and position themselves for a labour disruption, right in the middle of a pandemic,” said Goulet. “It’s time to stop playing these cynical games. People rely on the services our members provide. Let’s negotiate a fair deal and keep Belleville running.”

Both parties are meeting with a provincially appointed mediator today, Thursday, February 18. If a deal cannot be reached a strike or lockout could begin as early as Monday, February 22.

CUPE 907 represents over 200 frontline inside and outside workers for the City of Belleville.