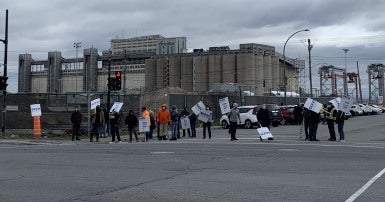 The proposed back-to-work legislation for Montreal longshore workers is an affront to all workers in the country. The Maritime Employers’ Association is largely responsible for the strike at the port and the impact it could have on the Quebec economy, but the employees are paying the price.

“The MEA refused to negotiate and resorted to various tactics to stay away from the bargaining table. The Liberal government is now acting as the employer and legislating employees back to work, restricting their rights to bargain collectively and strike. Fundamental rights are being denied. This is shameful for a government that calls itself a defender of the middle class,” said Marc Ranger, CUPE Quebec Regional Director.

The union offered to withdraw its strike notice if the MEA backed away from its pressure tactics on employees, in which case the impasse of special legislation still could have been avoided.

“From the beginning, the union has preferred negotiations, but it takes two active parties for talks to succeed,” added Ranger.