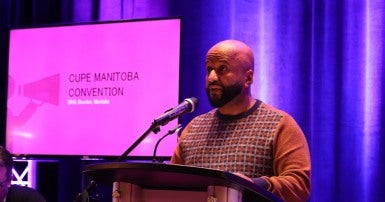 “Our union is focused on fighting back against cuts to health care, education, social services, and privatization,” said Araya. “Despite Brian Pallister’s attempts to divide working people, we will be uniting workers from across Manitoba to put a stop to Pallister’s austerity agenda.”

Delegates at convention voted in support resolutions, ranging from health and safety in the workplace, anti-oppression training for activists, pushing back against privatization, and supporting the Green New Deal.

“CUPE is an incredibly diverse union,” said Araya. “With the strength of 36,000 members we will be on the front line defending public health care and education, public Hydro, and fighting for properly funded childcare and social services for all Manitobans.”

Two hundred people rallied outside Brandon City Hall with CUPE Local 69 on Wednesday evening, voicing concern over the contracting out of work at the Wheat City Golf Course.

“Our union is stronger, and more united than ever,” said Araya. “Manitobans can count on CUPE to defend good jobs, and fight for our public services.”